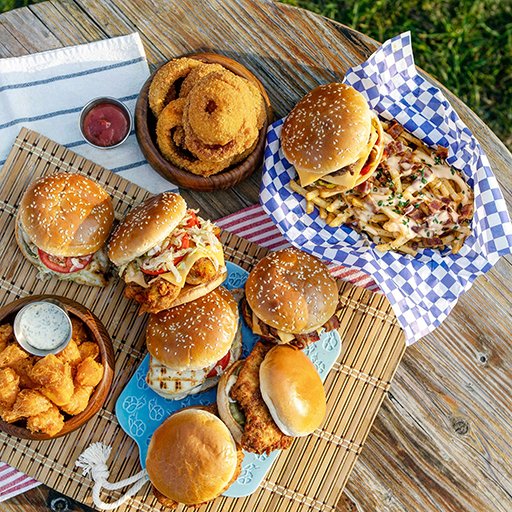 A dedication to Wisconsin’s dairy heritage is what led Fogle, his wife, Katie Fogle, Kurt Brent Fogle’s cousin, and their friend Joe McCormick to launch Dairyland Old-Fashioned Hamburgers last September at Common Cookhouse, a space for Food Entrepreneurs at 924 Rawson Avenue. , in Oak Creek. There people can order curbside pickup or delivery. They also have a food truck at Zocalo Food Park (636 S. Sixth St.).

Dairyland’s menu is inspired by the traditional hamburger and ice cream stalls found in the Wisconsin landscape. They have several styles of burgers and cheeseburgers, as well as fish and chicken sandwiches, fries, onion rings, cookies and handmade brownies, and Sconnie’s favorites like fried cheese curds. and Friday fish fries. Brunch, available Saturdays from 11 a.m. to 4 p.m., features several items of sausage and eggs. (Zocalo’s menu is slightly more limited.)

The quartet of restaurant industry veterans will expand Dairyland with a booth at the new 3rd Street Market Hall, which is slated to open in September in the former Grand Avenue Mall / Shops on Grand Avenue. The company will be renamed Dairyland Old-Fashioned Ice cream and burgers to reflect the addition of the classic Wisconsin treat.

Kurt had studied with renowned pastry chefs and learned to make ice cream under the direction of Jacquy Pfeiffer, master pastry chef and co-founder of the French Pastry School in Chicago. “We have a drop-down list of potential custard flavors,” says Kurt. “We really like to focus on super traditional things and make the best versions of them.”

Next to the Dairyland stand will be the Mid-Way Bakery, operated by Katie. Kurt says the name Mid-Way is ironic, inspired halfway between the European pastry masters the Fogles trained under, while also pulling the strings on their grandmothers’ aprons. The full-service bakery will offer breads, croissants, dutch, cookies and brownies. In addition to the bakery, they will have soup, takeout sandwiches and salads.

Dairyland’s agreement with 3rd Street Market Hall includes the management of four “hawker stalls” that will serve as incubators for local chefs and food entrepreneurs to experiment and launch food businesses under the leadership of the Dairyland team. “We want to help people get started and be the people we needed 10 years ago,” says Kurt. (See future Eat / Drink columns for an article on 3rd Street Market Hall and its vendors.)

Dairyland uses Clock Shadow Creamery cheese curds, along with meadow butter, bacon and sausage from Jones Dairy Farm. They recently partnered with Hundred Acre, a new hydroponic farm on the north side of Milwaukee. They source items from foodservice distributor V. Marchese.

Although they buy as much of the Wisconsin-made product as possible, McCormick notes that as a young restaurant, they don’t yet have the volume to source exclusively produce directly from farmers. “It’s hard for a dairy farm to work with us when we only buy 30 gallons of milk per week, but 200 to 300 gallons per week makes it easier for a farmer to say yes.

Kurt adds that they want to make custard using only Wisconsin milk, but they’ve found that it’s not always easy to verify. “Some dairy companies are growing. Sometimes we find that the milk is packaged in Wisconsin, but they cannot tell us for 100 percent certainty that the milk is from dairy farmers in Wisconsin.

California currently leads Wisconsin as the nation’s leading dairy-producing state. More than 800 dairies in Wisconsin closed in 2019 alone. “If you told someone Wisconsin was losing the battle against California in dairy farming, it would ignite them – it would ignite us. We can’t change the industry or change the world, but what we can do is make sure everything we use comes from a highly selected source of farmers and vendors in Wisconsin, ”concludes Kurt. .

Sheila Julson is a freelance writer who enjoys capturing the stories behind Milwaukee’s food, drink and urban farming scenes. She also writes on holistic health, green living, sustainability, and characteristics of human interest.